Many knowledgeable deer hunters carry .308 caliber rifles and for good reason; it is one of the most efficient and accurate cartridges ever developed.

The .308 caliber was designed to duplicate as closely as possible the 30-06 using 150- grain bullets. With the advent of ball powders and lighter rifles, the military wanted a smaller round that still had the power and versatility of the good old 1903-A3 Springfield. The result was a shorter case propelling a 150-grain bullet at 2800 feet per second. The .308 used less powder, a shorter action and was very accurate. Even today, the standard sniper platform for the military is the deadly .308.

Since the load, (case length, powder charge, shoulder, neck, etc.) was developed specifically for the 150 grain bullet, velocity and performance falls off rapidly with heavier bullets in comparison with the 30-06. However, anyone using the lethal Nosler Partition 150-grain bullet in his .308 was able to tackle most anything on this continent with a great deal of confidence and even use 165 or 180 grain bullets, though at lower velocities.

The perfection of the Barnes family of X-Bullets has actually rewritten what we can expect from our rifles, especially the .308. I have absolutely fallen in love with the .30 caliber, Barnes, 130-grain Tipped Triple Shock all copper bullet. This deer season my friends and I used this bullet in my 308 to bag 4 deer. We were amazed at just how well it performed and the increase in my rifles performance. So, the .308 cartridge literally begs you to use the 130 grain TSX in it and this is why!

Barnes loading data for the 130 TTSX shows 3 powders pushing that bullet over 3,200 feet per second in a 24-inch barrel. That is not sneaking by the 3,000 feet per second barrier, that’s leaping past it! Tables show maximum loads of 55 grains of Win 748 result in 3,222 fps. Our second powder, BL-C (2), pushes the 130 at 3,235 fps with 56 grains of powder while AA2460 completes the trio with 51 grains producing 3,221 fps. That is some serious velocity in your .308 and if you are a hand loader, you must be rubbing your hands together in anticipation of so dramatically increasing your rifles power and down range punch!

Practically speaking, you don’t have to hold over the deer’s back until past 325 yards. If you have ever used a range finder to accurately measure how far away that deer really is, you know a deer at 300 yards looks like an ant! I pride myself on my shooting, but if the opportunity to shoot that distance comes up, I will not shoot unless I have a dead rest, the deer is not moving and there is little wind.

Not only will your new hand loads zip along like a magnum caliber, they hit like a train with excellent penetration! Don’t allow the 130 grain bullets light weight fool you. The TTSX all copper, hollow point, construction allows them to expand to twice their diameter within the first inch of penetration creating a wide wound channel, while the remaining 2/3rds of bullet simply smashes it’s way through whatever else is unlucky enough to remain in its way.

Two of the 3 bucks shot were hit at the last rib, the shot angling forward and exiting the shoulder. Neither deer ran over 25 yards and both had identical almost 2-inch exit holes without the jellied mess lead bullets can leave. That is the type of bullet behavior I appreciate, after all, many of us clean and process our own deer and hate to waste meat.

The third buck was in a big hurry! He came leaping over a big pile of multa-floral rose bushes and accelerated down the trail. Nick Colley pulled up and in the fleeting second before the deer disappeared from sight, shot and dropped the 8-point like a sack of hammers! That is when the full power of this bullet became apparent.

The 130 smashed through the left, rear hip joint, ground up a section of pelvis, penetrated the stomach, diaphragm, a lung, traveled under the front, right shoulder, broke 2 ribs, exited the chest, finally shattering the heavy front leg bone. That is simply amazing bullet performance and one that shows the 130 would perform well on elk in my opinion; having the ability to shatter a heavy bone and still keep going, shattering another bone or bones exiting!

I just love to find the actual bullet an animal has been shot with. The hunter can study them and examine how they react to impact. I have a funny feeling that the only way I will ever recover a TSX from any deer shot will be to dig it out of a tree or bank behind the animal. What else can stop them?

So, .308 owners celebrate! Your old rifles have suddenly been reborn! Have fun hand loading for you and your friends and let me know about your experiences. Oh, by the way, are these bullets accurate? You better believe it! The “largest group shot has been three quarters of an inch! Yes, tipped TSX bullets simply do everything perfectly. You really need to try them. 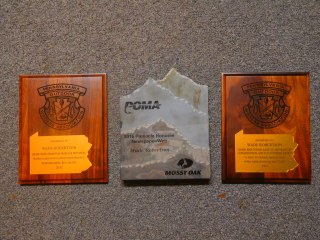